"Fifteen cities now have benchmarking and disclosure laws, which require building owners to report their buildings’ annual energy use to the local government, according to Dr. Margaret Walls of Resources for the Future. These include the early adopters of Washington, D.C., Austin, Texas, and New York, which passed their laws in 2008 and 2009, and Portland, Ore., Atlanta, and Kansas City, Mo., all of which adopted them in 2015." 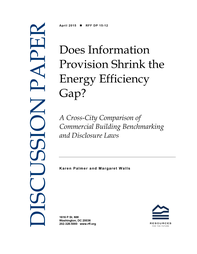