Comment on “The Intensification of the Water Footprint of Hydraulic Fracturing”

Comment by Daniel Raimi on a recent study examining the recent increase of the water footprint on hydraulic fracturing.

Kondash et al. provide a valuable contribution to our understanding of water consumption and wastewater production from oil and gas production using hydraulic fracturing. Unfortunately, their claim that the water intensity of energy production using hydraulic fracturing has increased in all regions is incorrect. More comprehensive data show that, while the water intensity of production may have increased in regions such as the Permian basin, it has decreased by 74% in the Marcellus and by 19% in the Eagle Ford region. This error likely stems from an improper method for estimating energy production from wells: The authors use the median well to represent regional production, which systematically underestimates aggregate production volumes. Across all regions, aggregate data suggest that the water intensity of oil and natural gas production using hydraulic fracturing has increased by 19%. There also appears to be an error in estimates for water consumption in the Permian basin.

EPA’s final report on the impacts of hydraulic fracturing on US drinking water resources removed language about a lack of evidence of systemic effe... 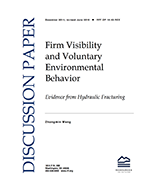